Here we are again, 8 months later and the Bizarro President is doing everything opposite that any normal President or person would do. Every one is in a uproar over the endorsement of building the Ground Zero mosque. Country is in a down word spiral and His wife in charge was vacationing with 40 of her closes friends in Spain costing Taxpayers millions. She say’s let them eat cake. The following week to appease the public the Bizarro President and family spent 27 hours in The Gulf Coast for a day of photo opts. Now they are off to Martha’s Vineyard. Never in the history of this country has a President spent this much time vacationing, let alone that the country is in a financial mess. The Bizarro President arrives in the morning to the Oval office at 9:30AM to start his day and is usually off by 3:30-4:40PM to play a round of golf or basketball. George Busch arrived to the office at 6:30am every morning and worked late many nights. Do you think Bizarro president thought this was a part time job? His thirty hour work week would make you assume that it is. He is like the city manager from the California city of Bell who made close to $800,000. a year and had 28 weeks of paid vacation and worked part time hours. Bizarro President’s approval numbers are at a all time low of 41% and sinking fast with his party going into the midterms elections. President Obama, please understand this is a full time job with unpaid overtime. I believe that you do not belong to SCIU and have no union negotiating your contract for you. President please get to work, quit complaining and blaming George Bush for every thing, 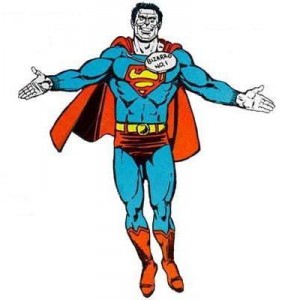 be smart, stop vacationing and always remember to
Suck it up Crybaby